Contrary to how it’s often portrayed, the small house movement isn’t all high rollers looking for vacation homes and middle-income outdoor enthusiasts looking to downsize. All over the country, Americans are collecting donations, materials, and volunteers to build tiny houses for the homeless.

Many of these villages have the same simple rules: no violence or disruptive behavior, no theft, no alcohol or illegal drugs. While some of these communities report having to evict residents for breaking the rules, they also share stories of residents who were able to get clean during their time in the village, moving on to renting their own apartments and even buying homes. Dignity Village originated as an illegal tent city for Portland’s homeless way back in 2000, but stands today as a non-profit organization sanctioned by the city government, housing up to sixty people at a time.

Residents pay $20 per month for amenities like water and electricity, and devote ten hours per week to volunteering in the village, where they may live for up to two years. While there is a waiting list for space at this tiny house community, Dignity Village is worth the wait as it offers showers and high-speed Internet to the entire Portland community.

Properly named, this village does more than shelter the homeless. Not only do residents learn about recycling, construction, and gardening, they also have the chance to voice their opinions and govern themselves and the village.

Inspired by Dignity Village, urban planner Andrew Heben opened Opportunity Village in October 2013. This single-acre neighborhood puts the “unity” in “opportunity”, requiring all residents to help with maintenance and operation of shared facilities, including the greenhouse, indoor/outdoor kitchen, restrooms, and showers. By making these facilities separate and relying on donated and recycled materials, OVE lowers their Conestoga hut and bungalow costs to approximately $3,300 per unit. In addition to volunteering, residents are expected to contribute $25 per month to utility and insurance expenses. While they may only have a bedroom to themselves, villagers often enjoy spending time with each other, and have the entire community to call home.

Opportunity Village Eugene is also in the process of founding Emerald Village, including fifteen tiny houses and a community center. Residents will be asked to pay a small rental fee, attend monthly meetings, volunteer ten hours per month, and participate on one of three committees: Membership, House & Grounds, or Management.

Since forming during the Occupy Wall Street movement in late 2011, Occupy Madison has grown from their roots as a tent city. By raising money through OM Goods (selling items such as T-shirts, buttons, and handmade signs) and putting volunteers to work with OM Build, the organization was able to open OM Village–a tiny house community for the homeless–in late 2014.

As is the case for most low-income housing, there are not a lot of spaces available, so homeless Wisconsinites are expected to volunteer to earn residency–some even building the home they end up living in. Because the homes are made mostly from recycled materials, they only cost about $5,000 to construct. Each tiny house is spacious enough for a bathroom, bed, kitchen, and storage space, allowing residents to rest assured that they and their belongings are safe.

Occupy Madison is also in the process of forming a day labor program called OM Works.

Like the aforementioned villages, Quixote Village started as a tent city and opened as a self-governed tiny house community (funded by the non-profit Panza) in late 2013. Resting on just over two acres, this site features thirty cottages, a vegetable garden, and a community center with showers, cooking, dining, and living areas. These tiny homes cost approximately $19,000 a piece including paid labor, and offer a view of Black Lake Meadows. Rather than charging fixed-price rent, the village asks residents to pay thirty percent of their income each month, although not all residents are employed.

In 2014, Panza received a Phoenix Award from Behavioral Health Resources for their work on Quixote Village. This upcoming community is ten years in the making. Founded by Mobile Loaves & Fishes, the Community First! Village will include 5th wheel RVs, micro-homes, and canvas-sided cottages on its twenty-seven acres, including two built and donated by Texas A&M’s College of Architecture. Because this village will have over two hundred residents, it will also have a medical facility, a workshop, and even an outdoor theater in addition to showers, outdoor kitchens, and laundry facilities.

Keeping sustainability in mind, Community First! will have vegetable gardens, fruit- and nut-trees, and even aquaponics: an aquacultural system in which fish waste is used to purify water and provide nutrients for growing plants.

While villagers will be expected to pay $90+ per month in rent, the resources available within the community will give residents a much higher chance of employment, making the payments much more realistic and achievable–certainly more so than any other residential community in Austin.

How You Can Help

If you want to support these incredible communities, there are plenty of ways you can help. You can always volunteer at OM Build, Quixote Village, or Community First! Village. You can also join the OM Build Volunteers group and like Opportunity Village Eugene on Facebook for updates on volunteer opportunities. Dignity Village, Opportunity Village Eugene, Emerald Village, Occupy Madison, Quixote Village and Community First! Village would all benefit from donations as well.

Interested in founding a tiny house village in your community? Head over to The Village Collaborative or Occupy Madison for resources and advice!

Calista is a writer and editor who enjoys having less stuff inside and more experiences outside. If you can't find her in the woods, try LinkedIn. 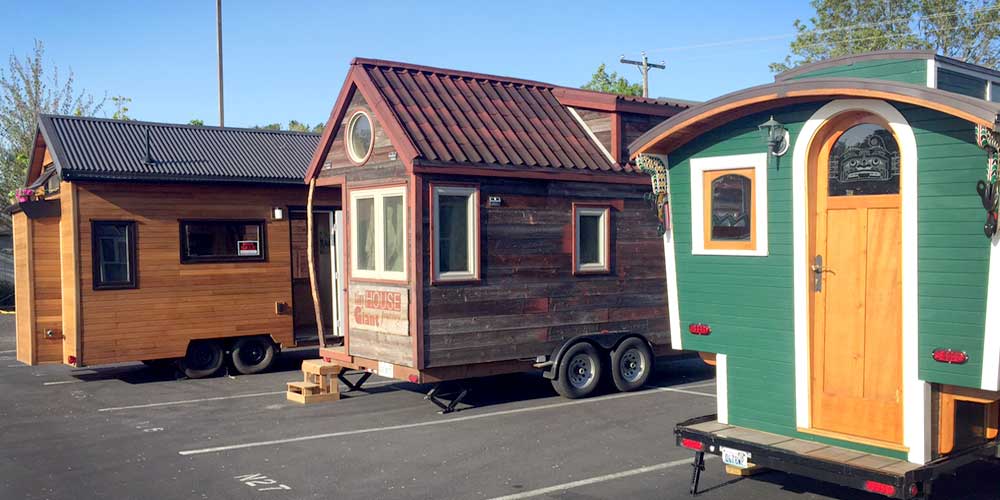 How to Prepare to Live in a Tiny Home Size Does Matter: Why Small Living Might Be Better For You [INFOGRAPHIC]