The History of RV’s: Celebrating 100 Years of Mobile Living The modern recreational vehicle, otherwise known as the RV, has been around for over a century. In America, RVing has grown to become a highly popular hobby and lifestyle that offers freedom and adventure, without sacrificing any of the conveniences of home. In honor of this hobby, let’s take a look at the history of RVs and how they have evolved from covered wagons into 40-foot luxury cruisers.

While the term “RVing” was not coined until the early 1900s, people have been living on the road for centuries. Early American explorers and pioneers used various horse-drawn carriages to live out of while forging new territory for months on end. According to historians, the original idea for the modern RV came from European gypsies, caravaners and nomads who lived out of covered wagons, constantly moving from place to place.

Towards the latter end of the 19th century, people were traveling and camping in private railroad cars that were pulled along and left at designated locations. While this fueled the thirst for adventure, travelers were still limited to destinations along the railway line.

In the first part of the 20th century, America had no highway system. There were few roads and even fewer gas stations. As automobiles began to be mass produced, however, the county’s entire infrastructure changed. More people were drawn to exploration and adventure, and the year 1910 saw the production of the first motorized recreational vehicles.

The first RV units were towables designed to be pulled by a separate vehicle. Unlike railcars, these “auto campers” or “camping trailers” gave travelers the freedom to go where they wanted and leave when they wanted. While nowhere near today’s models in terms of comfort and amenities, the first RVs still supplied beds, storage areas and the capacity for home cooking. At the time, bathrooms were highly uncommon. Even still, by the end of 1910, LA-based company Trailer Works became the first manufacturer to unveil a camper with basic restroom facilities.

RVing as a hobby really took off during the 1920s. In 1919, The Tin Can Tourists became the first official club for RV enthusiasts. These pioneers created history for the next two decades, forging unpaved highways across the United States. In their “Tin Lizzies,” they camped on the sides of roads, bathed in rivers and devised clever ways of mobile living.

In fact, many would weld tin cans to their radiators as way to warm up food. This is how the club coined its original name. The organization still exists today for RVers who are passionate about owning and restoring vintage vehicles.

Innovations of the 1930s The following decade saw several key improvements to the RV’s structure thanks to industry innovators like Ford, Airstream and Winnebago. These manufactures produced units in a variety of different sizes and offered prices anywhere from $500 to $1000. Airstream, in particular, gained notoriety for its production of aircraft-style campers. These aerodynamic units were the first fully self-contained trailers. They featured a more durable aluminum shell, and many came equipped with electricity and water.

RV production came to an abrupt halt following the onset of the Great Depression when most Americans were simply trying to survive. Plus, the shortage of aluminum during World War II made it impossible to mass produce units for public use. While manufacturers did continue to offer trailers for prison transport, mobile hospitals and morgues, RVs were not available for public purchase until after the war. As soldiers began returning home, people once again began pursuing ways to relax and travel on a budget.

Modern RVing went into full force during the 1950s. It was during this decade that many of today’s big manufactures began producing their first models. Veteran companies like Winnebago unveiled a variety of different models for a variety of different budgets. From small DYI kits to luxurious 30-foot trailers, there were plenty of options to choose from.

This was also the time period that motorhomes became popular. Unlike towable campers, these vehicles combined car and trailer into one self-sustaining, bus-like unit. Further advancements were made in areas of aerodynamics and interior comfort. In an effort to meet the demands of their consumers, manufactures began offering innovative features like plumbing and refrigeration.

A Shift in Purpose As public interest evolved through the 1960s, RVing began to take on a new identity. While most early enthusiasts traveled either as a means of full-time living or for occasional outings, newcomers were enjoying destination travel. The love and peace era of the 1970s was big business for RV makers, as millions of people attended extended musical festivals and political gatherings.

Since its early stages, the RV industry has continued to evolve in order to keep up with emerging technology. Nowadays, RV’s feature a wide range of appliances and amenities, including showers, dishwashers, washers and dryers, cooking tools, microwaves and even satellite dishes. Today’s top-end units feature Internet access capabilities, the latest GPS and computer technology and an opulent selection of luxury features. Furthermore, the largest units boast lengths of over 40 feet with innovative pullout systems that nearly double the square footage when the RV is parked. Budget is now the only true limitation, as manufacturers are producing RVs with all the modern conveniences of a custom-built home.

In 2010, the Recreational Vehicle Industry Association celebrated 100 years of RV history. Today, enthusiasts enjoy long distance travel for extended periods of time. This has led to the development of thousands of government and private parks and campgrounds that cater specifically to RVs. Most facilities offer full electric, water and Internet hookups as well as a wide range of resort-style amenities.

The growing industry has also spawned organizations like The Good Sam Club. These companies offer web-based directories for locating RV-friendly parks nationwide. Users can search properties with a variety of filters and can even purchase annual memberships that grant access and discounts to all the facilities within a particular network.

RVing has certainly evolved from its humble beginnings, but the original passion remains the same. When you pair millions of miles of highway with the conveniences of innovative technology, you’ve got a comfortable and exciting way to see everything that America has to offer. How to Find the Best RV Park or Campground How to Make Your RV More Cozy 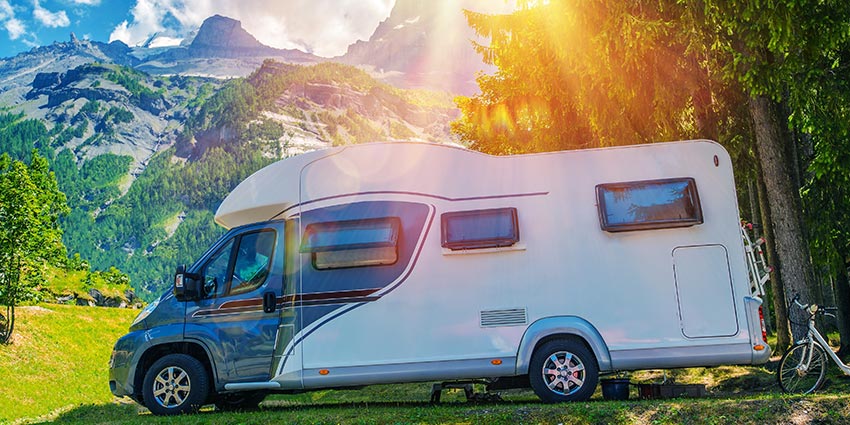 5 Tips for Renovating Your RV 6 Tips for Doing Laundry in an RV How to Design a Functional Tiny Kitchen